Before discussing the technologies of AI and Blockchain, one needs to know what they are. AI is a technology where Artificial Intelligence is provided to a particular device that drives the device to act like a human. In Blockchain each record is maintained in the form of a block, and hence one can have an accurate picture of a particular item before dealing with it. Both of these technologies if combined, can offer tremendous results and hence in many areas, human interference will be almost removed. Therefore experts presently focus on the avenues where these technologies can be combined and offer the best results.

In today’s digital world, data has become an important commodity that is sought by many companies and individuals for their own benefit. Many users put a lot of sensitive data on social media platforms and cloud platforms. This can become a huge threat if proper security is not provided to such data. Artificial intelligence is very useful in this situation as it can monitor network traffic effectively and handle complex tasks related to cybersecurity. On the other hand, blockchain technology can make it easy to have decentralized storage, and it can reduce breaches by a huge margin. When you combine both of them, you can get the best advantages of both these technologies. 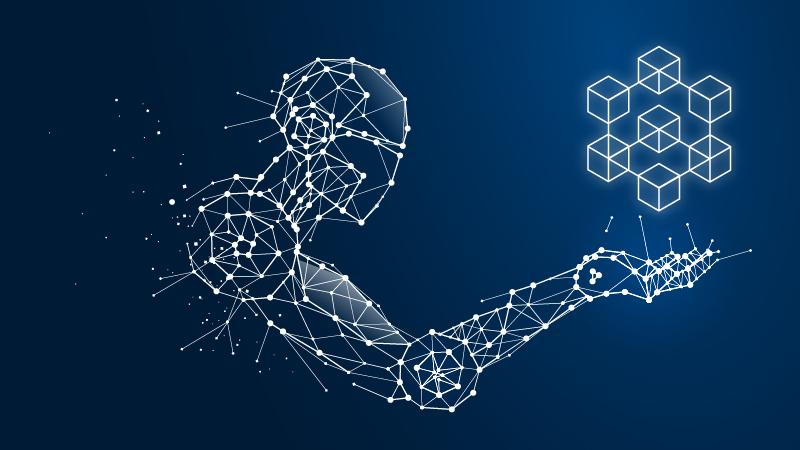 Storing data in a decentralized manner

Most organizations rely on cloud storage as a way to safeguard their data. They also store sensitive information on cloud networks and hope that they do not get breached in the long run. However, there is always a threat when you have all your data in one place, and it can become very attractive for hackers to attempt a breach.

However, by choosing blockchain technology to fix the threats, the concept of a single server is removed, and the sensitive information gets stored in different blocks. By implementing AI software into this system, the network can be continuously monitored for any unnatural traffic. This makes it easy to identify vulnerabilities, and it almost becomes impossible for hackers to gain hold of any data.

When a hacker wants to crash a server, they often use multiple trojan attacks and flood the server with lots of traffic. This leads to server crashes, and cybercriminals can easily get hold of valuable data in this situation.

In the recent past, we have seen many such instances with popular portals, and they have been shut down for many hours due to such attacks. The cloud system has some backup for this sort of attack, and it will redirect the users to a different server that is safe at the moment. Even though this can resolve the issue temporarily, attackers will have access to confidential data even if they manage to breach a single server.

Using blockchain technology is an excellent way to prevent such attacks as the data is not stored in a single server, and it gets distributed among different servers. In this way, it becomes difficult for hackers to crash all the servers at once. The system can be further improved with the help of AI, and it analyses the threats in real-time and provides an alert so that the technical team can take suitable counteraction to stop the attack and protect the data.

When it comes to identifying the users, different servers, and programs have different logic. Some of them go with a single password, and others require complex face recognition tools to authenticate the users. In this regard, it is important how they store the data in the long run to prevent any attacks.

In this regard, some organizations prefer to enhance security by choosing a two-factor authentication. In this method, users will have to provide two levels of passwords to gain access to the accounts. Service providers can secure the accounts in this method as the dynamic access to such accounts can be used as one of the authentication factors. In common terms, users will input a standard password and use another dynamically generated password sent by the servers to gain access to the accounts.

However, companies often store all the data in a single server or cloud server to make it easy for the customers to access the account in a quick time. Even though this is easier to handle in the long run, it creates a lot of problems when attackers are able to gain access to the servers through some methods. In that situation, they get access to complete data in one place, and they can easily use this to access a user account in the future.

Using the blockchain technology is a boon in this situation as the two-factor authentication data can be stored in different servers. In this situation, when the hackers have control over one server, they will still need the data of the other server to gain complete access to the user accounts. The simple act of using different servers for two-factor authentication can prevent hacking attempts by a huge margin in the future.

Along with this, AI can be used to analyze the traffic in real-time, and it is a matter of common sense to get the same amount of traffic for the two-factor authentication on different servers. As any user will have to go through both the levels of authentication, the traffic on both the servers having different authentication data will have to be the same. When there is any big discrepancy in the traffic of these servers, the AI programs can trigger an alarm, and technical experts can get into action to prevent any further damage to the servers.

In this way, the combination of Blockchain and AI technology can power different sectors in the future. Such applications are already being used in the financial and technology sector. You can try to understand the various benefits of both these technologies and implement them in your organization to secure your data and prevent any sort of breach in the future.