A former minister who held various cabinet positions in the previous regime of Yahya Jammeh has been arrested and detained by police.

Yankuba Touray was taken into state custody this morning after he refused to give self-incriminating evidence at the truth and reconciliation commission probing alleged atrocities committed by former leader Yahya Jammeh.

Mr Touray was named by witnesses to have had a hand in the killing of former Finance Minister Ousman Koro Ceesay and the torture of opposition supporters.

But appearing before the commission, Mr Touray who was a member of the five-man military junta from July 1994 to January 1997 and later held various positions including minister for Tourism and Youth and Sports, argued that has got immunity from prosecution for any human rights violations committed during the military regime. 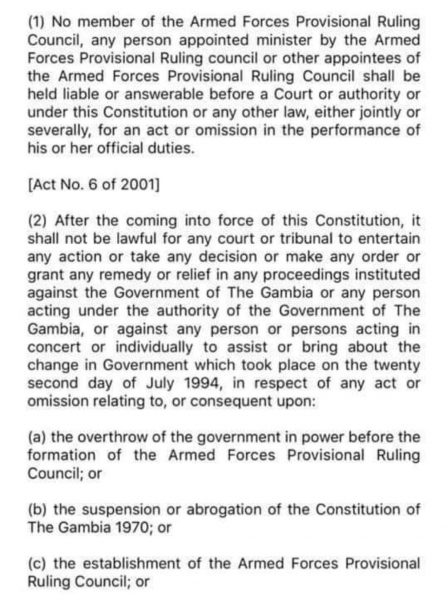 Following the return of the country to civilian rule in 1997, Gambia’s National Assembly passed a law to shield members of the junta from prosecution for any acts or omissions done intentionally or not in the execution of their duties.

Touray’s defence was however rubbished by the commission’s chairman Lamin Sisse, who ordered for his immediate arrest and contempt of court.

“Even if claims of his immunity is to be accepted which is not the case, he cannot lawfully refuse to appear before the commission and answer questions that do not directly violate the immunity he claims,” Mr Cisse said in a prepared statement.

He added: “Mr Touray was informed several times that failure to respect the subpoena  issued by the Truth, Reconciliation and Reparations Commission (TRRC) constitutes a contempt of court and is liable to be referred to the high court for prosecution.

“In the light of this, the commission has to act firmly and within the parameters of the law to ensure that actions of this nature are dealt with by the full force of the law. I therefore have no choice but to order for his arrest.”

This is not the first time Mr Touray has fallen out the commission. In March this year, the former minister was spent several nights in police custody after he was accused by the commission of tampering with its witnesses. He was later charged with witness tampering but the charges were dropped this month after the state was unable to proof the case against him.